Plastic Century is a simple – but provocative – art installation that demands you to consider, in a visceral way, the impact of plastics on our environment. 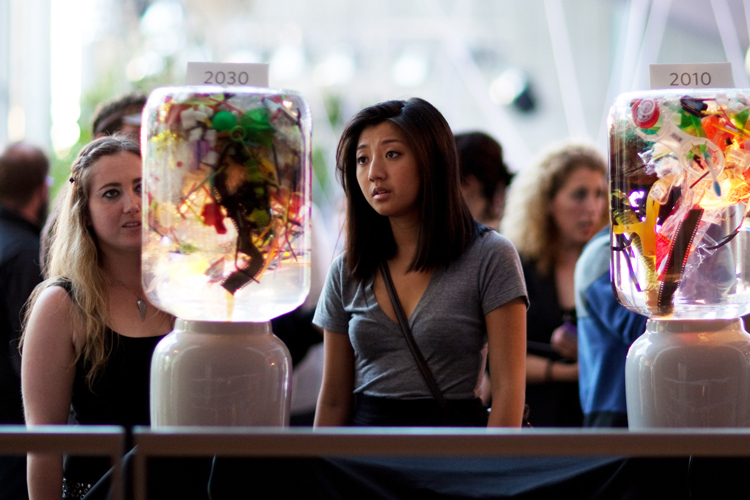 Cumulative global plastic production has risen from 60 million tons in 1910 to 6,000 million tons in 2010 – with a projected 12,500 million tons in 2030. Americans alone generate 10.5 million tons of PLASTIC waste a year but recycle only 1 or 2 % of it. An estimated 14 billion pounds of trash – most of it plastics – is dumped in the world’s oceans every year, killing as many as 1 million marine animals and birds. Moreover, plastics absorb organic pollutants like toxic sponges, concentrating the poisons and finding their way into the foodchain, from fish to humans.

The purpose of the installation is twofold: First, it aims at drawing attention to the fact that plastic production has been increasing on an exponential curve for just over a century, and second, at prompting reflection on the idea that plastic never leaves — it accumulates in the biosphere, in the food chain and in our bodies. The most challenging aspect though was to get people to feel a certain emotion in what would otherwise be an abstract domain.

At the occasion of the World Ocean Day 2010 and Jacques Cousteau’s 100th birthday, Institute for the Future member Jake Dunagan, futurist Stuart Candy, artist Sarah Kornfeld, and oceanographer Wallace J. Nichols came together to present undeniable facts through an interactive art installation to let onlookers emotionally connect with the issue of littered oceans. The creators of Plastic Century wanted to see what would it look like if they “figured out a way to make artifact, an installation, where people could engage with this difficult topic, but where they had options that came out of it.”

Plastic Century asks onlookers to drink water from four different coolers, each filled with bunches of plastic. But there’s a catch–the four coolers are labeled by year, extending from 1910 all the way through 2030. And, unsurprisingly, the amount of plastic in each cooler rises along with the date.

As the project creators state: “This is something that people can look at and feel on a visceral level.” Yet, the emotions that come from drinking trash-filled water – disgust, revulsion, sadness – are offset by the knowledge that 2030 hasn’t arrived yet. There is still time to fix things.

The art installation “Plastic Century” was exhibited at the California Academy of Science in 2010. Moreover, the creators planned on launching a website where onlookers could express their reactions to the piece, serving as a spark for a broader discussion of the issue. Unfortunately, the website seems to have been erased from the web.