Thousands of pieces of trash that would otherwise be clogging waterways and landfills in Nigeria have been turned into sturdy, and surprisingly attractive, homes. 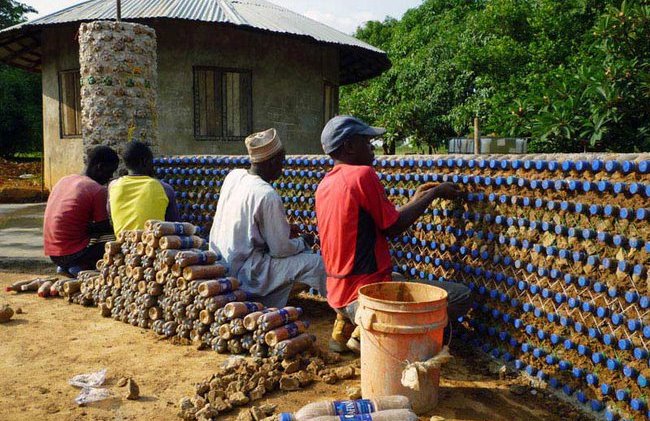 Environmental experts say Nigeria, a country of some 160 million, throws out about three million plastic bottles daily. According to Trade Invest Nigeria the area of Lagos alone produces 9,000 tonnes of waste each day, with the bottles being dumped into waterways and landfill each year causing pollution, erosion, irrigation blockages, and health problems. Moreover, each plastic bottle takes on average 450 years to biodegrade.

The country is also grappling with a deficit of 16 million housing units that requires a staggering 45 trillion naira ($300 billion) to meet, according to Nigeria’s Federal Mortgage Bank. As a recent UN projection from 2013 predicts, the country’s population is expected to surpass that of the US by 2050, making it the third most populous country by the end of this century – and housing shortage ever-more menacing.

Across the world complex sustainable technologies are being researched to provide futuristic solutions to the common problem of excess waste. In the village of Sabon Yelwa the Developmental Association for Renewable Energies (DARE) has instigated an ingenious scheme to transform the region’s litter problem into a positive future for the community through the construction of new residences.

Twenty-five houses constructed from recycled plastic bottles filled with sand are being built on land donated by a Greek businessman and environmentalist. Each house – with one bedroom, living room, bathroom, toilet and kitchen – uses an estimated 7,800 plastic bottles. This “bottle brick” technology that started nine years ago in India, South and Central America, is perfectly suited to Nigeria’s intensely hot climate as the sand provides an insulating layer, keeping room temperatures low and creating a fireproof and earthquake-resistant wall. One of the project leaders claims that the compacted sand inside a bottle is nearly 20 times stronger than bricks. And bullet proof, which may also prove another attraction in more insecure parts of the north.

The two main construction materials – plastic bottles and sand – are not only at the core of the idea, but also the main challenges.

As most water in Nigeria is sold in small plastic bags, and bottled water only accounts for about 20-25% of official sales (the equivalent of up to 500m litres a year), bottles are a rather scarce resource. And they are actually sought after by street vendors using them as packaging for produce like peanuts. So far, the bottles used are therefore currently sourced from hotels, restaurants, homes and foreign embassies.

Some expressed concern about the amount of sand needed for the new houses. And usually, as demand rises, so do prices. To prevent unnecessary expenses and people from looking for sand from digging everywhere, the bottles are (now) being filled with dry soil or construction waste, not sand.

Starting in December 2010, this pilot project was headed by the NGO DARE with help from London-based organization Africa Community Trust whose aim is not only to find a sustainable alternative to Nigeria’s immense housing shortage, but provide street children with a stable job and a place at the next building project – a local school. So as a first step into fulltime employment and returning to education, teenagers from the area worked on the construction project.

After the bottles have been filled with sieved dry soil and construction waste, they are placed on their side and laid in rows like bricks. They are then bound together with mud, producing a sturdy, well-insulated, and inexpensive three-room structure. An intricate network of strings holding each bottle by its neck provides extra support to the structure.

The architectural beauty of the house is its outside wall as the round bottoms of the exposed bottles produce a lovely design. Furthermore, its environmental beauty consists in plans to make those new homes energy autonomous: They will be solar powered, with a fuel-efficient clean cook stove, urine filtration fertilization systems, and water purification tanks.

While for those behind the project its environmental benefits are what is most important, it solves several distinct problems at one: First of all, landfill is reduced and additional waste prevented by using discarded plastic bottles. Secondly, affordable and safe housing is provided. A plastic bottle house costs about a third of the price for a conventional building. At the same time, it is more stable, protecting its inhabitants against bullets and being sturdier in case of earthquakes. And thirdly, the community is provided with (at least seasonal) work. After the 25 houses had been completed, the next construction project is a school on the estate, giving the children access to education.

Nigeria’s first house built from discarded plastic bottles is proving a tourist attraction in the village of Yelwa. Hundreds of people – including government officials and traditional leaders – have been coming to see how the walls are built in the round architectural shape popular in northern Nigeria.