A disposable triumph: the UK’s first fully-functioning theatre made entirely from recycled and reclaimed materials. 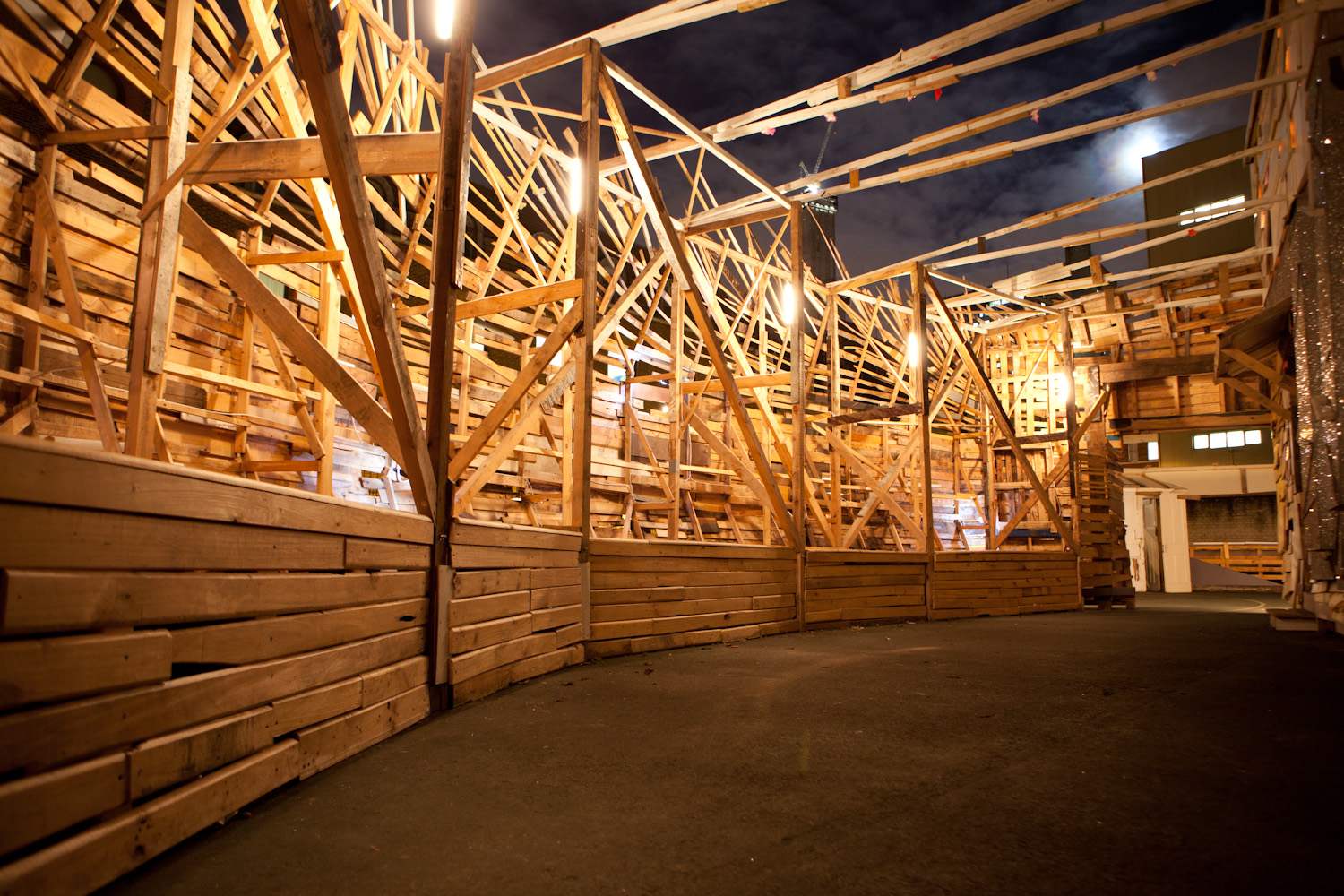 Initiated by theatre production company The Red Room as part of their ‘oikos project‘ (oikos being the root word of economy and ecology), a creative team of architects, artists and authors wanted to raise awareness to the topic of climate change during the London Festival of Architecture in 2010. Their goal was to get people engaged without a wagging finger or a moral sermon. Instead of dictating the “right” future, they wanted to create a space to give various approaches a trial.

Contributing to an architecture event – and competing for attention with various breath-taking buildings all over London – without losing sight of the message to be communicated: That climate change is a pressing but not hopeless issue.

The idea for the recycled pallet theatre sprung from the minds of the Red Room’s artistic director, Topher Campbell, and its producer, Bryan Savery. Martin Kaltwasser and his wife, Folke Köbberling were brought on to design and construct the theatre. “One man’s trash is another’s man treasure” served as leitmotif showcased in the choice of material for this temporary social structure: only recycled materials were used – even the nails were reclaimed!

So how did they come up with the name Jellyfish? According to Kaltwasser, “people find jellyfish disturbing. And yet they’re fragile creatures. They need the clean waters we’re making dirty. And they appear to come and go, just like that.”

Pretty much anything that local residents and businesses contributed – and that would otherwise have become “landfill” – was recycled and turned into an impressive structure. While the project team had a rough idea of the final result, the building process was completely open stage. Over 800 shipping pallets and 750 sq meters of plywood and other material were donated to construct the theatre. Old-school furniture serves as the seats inside the auditorium, and reused five-gallon water jugs are stacked together to form the wall of the lounge. But most importantly about 80 volunteers invested more than 4,000 hours of work to make this social sculpture happen.

Whereas the building could have spoken for itself, it was enlivened by two theatre plays written specifically for the occasion: Oikos and Protozoa were performed in this unique venue during September and October 2010. Both plays deal with people rebuilding their lives after political and environmental catastrophe and are based on the ultimate question of “How do you rebuild society when everything ends?”, examining how we as humans have to remake the world to tackle issues such as climate change. One of the project members describes the collaboration as “total theatre”: the building itself – the idea behind it, the way it’s being built, the way it feels – is very much a part of the plays.

Focusing on energy-efficiency, co-operation and human-scale construction, the Jellyfish theatre was showcased in July and opened to the public in August 2010. The 120-seat theatre, which fully complies with local building, fire and safety regulations, enjoyed no more than a fleeting life, however: After the performance period it was completely dismantled and its components recycled yet again.

Although the London team was not the first one having the idea of creating a pallet theater, they were the first ones to actually build one – proving that local people are able to create their own public projects. This was a ground-breaking project, which empowered people to realize new possibilities in how we might live in the future. It involved a real collaboration between local residents, school children, environmentalists and theatregoers.

Moreover, the project was well-received in the design community, maybe being the momentum for further “junkitecture” initiatives.