Fuel from the Fields charcoal is an inexpensive, clean-burning, environmentally-friendly alternative cooking fuel made from agricultural waste materials. 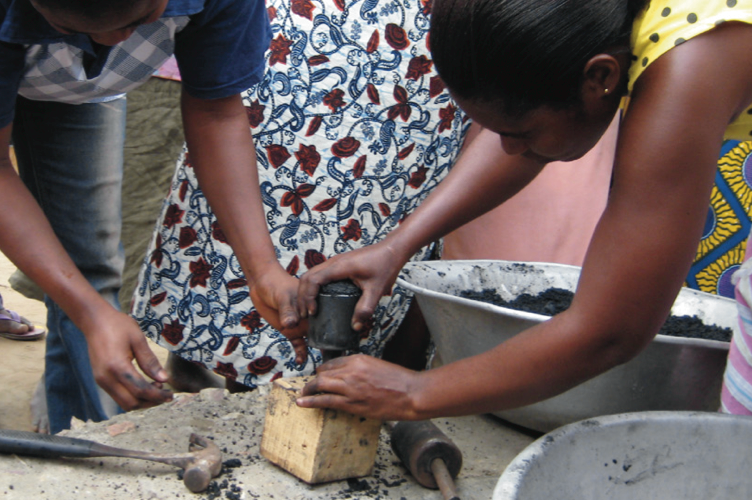 More than 2 billion people use wood, charcoal, dung or agricultural residues as the primary fuel for their cooking and heating needs, leading to significant health, economic and environmental consequences. Burning wood or agricultural residues produces smoke with a variety of irritant pollutants, some of which are known carcinogens. More than 1.5 million deaths a year are caused by acute respiratory infections from breathing smoke from indoor cooking fires, accounting for 2,7% of the global burden of disease, according to WHO. Women and children are generally exposed to the greatest levels of pollutants and it is children who suffer the greatest health risk – respiratory infections are the leading cause of death of young children worldwide.

Small-scale subsistence farmers who make less than US$2 per day may use wood charcoal for cooking fuel. In areas where wood is scarce and farmers are not able to collect it themselves, the cost of cooking fuel is a significant drain on their limited resources. An estimated 50 billion hours are spent collecting firewood each year and families can spend over 25% of their income on fuel, leaving them with less income to cover other basic needs such as medicine, food and clean water. For comparison, even the poorest 20% of the U.S. population spends only 1% of their income on energy for their household.

Several attempts have been made to introduce environmentally-friendly, cleaner cooking alternatives such as solar cookers, fuel-efficient stoves and charcoal briquettes made from paper. Solar cookers can be slower than traditional stoves, may work only during limited hours on sunny days, and are often unable to fry foods, which precludes them from being used to cook many traditional dishes. Fuel-efficient stoves have started to be disseminated in regions ranging from India to Sudan, but while they reduce the consumption of wood-based or fossil fuels, they may not necessarily eliminate it. An effort to produce briquettes from waste paper was introduced to reduce wood use, but initially these briquettes can be difficult to use and they still produce a significant amount of smoke. Furthermore, waste paper is not readily available in many rural areas. For alternatives to traditional cooking to be met with better success, they must prove to be affordable, effective and culturally acceptable.

In 2002, D-lab at MIT developed a radically different solution called “Fuel from the Fields” that addresses the problem of fuel scarcity with the economic needs of small-scale farmers in mind. The project offers farmers a way to turn their agricultural waste into charcoal, a cooking fuel alternative that is more affordable and healthier than wood-based fuels.

To make the charcoal, agricultural waste materials appropriate to the season and the region are carbonized in a kiln made from a 55-gallon oil drum. The carbonized material is then crushed and formed into briquettes using a small press and a binder made from a source of starch such as cassava, also known as yucca and manioc. The process takes a few hours and requires only simple devices which can be made from local materials and production methods for less than US$25. A farmer can produce enough charcoal to pay for the equipment and start making a profit in less than a month. Microcredit institutions can also provide loans to help entrepreneurs.

D-Lab is collaborating with community partners in many countries to ensure the product and process are affordable and meet the needs of the local population who will make and use the charcoal. The technology would not be where it is today without the community partners, who have contributed a number of innovations from the field. The evolution of the charcoal-making press has also been turned into a case study, showing how feedback from local users helped transform the device into a simple form that uses 90% less material, operates faster and cost 10 times less.

While charcoal-making technologies have been around for thousands of years, they are often based on a centralized production and distribution model that can require a capital investment of tens of thousands of dollars. This charcoal can be made locally and inexpensively and has positive health, environmental and economic benefits: it burns cleanly, reducing exposure to the smoke that causes respiratory infections; it uses agricultural waste materials, and therefore does not contribute to deforestation; and it transforms a waste stream into a high-value, income-generating product – in Haiti, a bag of charcoal sells for US$10. By producing their own charcoal, farmers can not only save money that would have been spent on cooking fuel, but can sell excess charcoal in the market for an additional revenue stream.

As a result, more than 1000 local producers have been trained in the charcoal-making technique and 61 ateliers (or local workshops) for producing charcoal have been established in Haiti. The project has also been featured in numerous websites, radio programs, newspaper articles, magazines and books. D-Lab has also demonstrated the charcoal-making process in over 20 countries (e.g. Haiti, Pakistan, Ghana, El Salvador, Kenya, Thailand, Tanzania, Peru) and developed materials to show people how to build each of the 3 pieces of charcoal-making equipment, teaching important skills for developing appropriate technologies in the process.